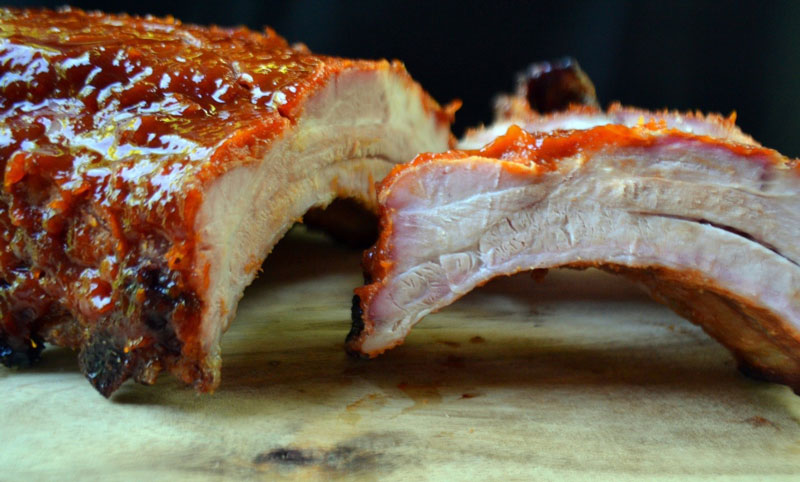 America’s penchant for barbecue is indisputable. This highly revered practice of preparing food according to the philosophy of barbecue is firmly entrenched in our cooking traditions.

One of the favorite staples of barbecue lovers are ribs. But not all ribs are created equal, and some fail miserably when cooked on a barbecue. The good news is that now, with the versatile multi-tasking abilities of the Memphis Wood Fire Pellet Grill, all ribs have an opportunity to shine. Even the inherently tougher cuts like beef ribs will meet a positively tasty outcome when cooked on the Memphis. The Memphis Wood Fire Pellet Grill can not only grill and smoke the best of what rib cuts have to offer, but it can also easily bake and braise any other rib type to perfection.

So, now that we have the perfect cooking medium at our disposal, let’s look at the most common ribs available on the market.

The most popular rib cuts come from the ribcage of a domesticated pig. Tenderness and flavor is dependent on the meat’s ribcage location, the thickness of the meat, the bone, and the amount of fat found in each cut. A traditional choice for barbecue is either back ribs or side ribs.

Note: On the inside of both back and side ribs is a connective tissue that is difficult to break down during the cooking process. It is called the pleura. Before cooking it is wise to remove this connective tissue and discard. To keep your fingers from sliding off when trying to grip this membrane, try to grab its edge using a small piece of clean paper towel. This provides some traction when pulling on the pleura, which is thin but very strong.

These ribs are located at the top of the ribcage, between the spine and the side ribs, just below the loin portion of the pig. There is meat between the bones and on the surface of the rack, and the racks are typically shorter in length at one end due to the taper of the ribcage. A full rack includes 13 ribs, and half racks are usually 6 or 7 ribs. Tender and meaty, these ribs are usually the most expensive.

Side Ribs (or spare ribs)

These ribs are from the belly side of the ribcage located between the back ribs and above the breast bone. Side ribs are flatter in shape and contain more bone than meat. The big plus here for side rib lovers is that they also contain more fat, which in turn causes the meat to be more tender than its back rib counterpart. There are two more variations of side ribs you’ve most likely heard of; St. Louis style ribs and Kansas City style ribs:

Country-style ribs aren’t technically ribs. They are cut from the uppermost part of the blade end of the loin, and look like a cross between a pork chop and a rib. These are the meatiest of all the ribs but the meat is sandwiched between layers of fat and actually isn’t as marbled as the other pork ribs mentioned above.

Being marbled with fat gives rich beefy flavor to these ribs. But proper preparation is essential, as beef ribs can become tough and way too chewy. As with pork, not all beef ribs are equal. There are many different cuts, and correct preparation will be dictated by where on the steer the ribs are from.

These ribs are cut from the cow’s loin. Each slab contains five or six bones and the beef on these ribs are located between the bones. Back ribs are great for braising because the marrow in the bones are full of beefy flavor, which absorbs into the liquid over a long braising period. If grilled on the BBQ, low and slow is the rule of thumb. You may also want to smoke back ribs for an excellent result, just make sure you do so slowly and over a low heat (around 225 F on the Memphis) for a long period. This allows the connective tissues to break down and the end result will be a nicely smoked and tasty rib.

These ribs are cut from the bottom end of the ribcage, called the plate, or from the chuck. The meat on short ribs sits on top of the bone. These ribs do not lend themselves well to grilling, but benefit instead from a long low temperature smoke or by cooking slowly in a braising liquid.

When short ribs are cut into thin strips across the bones they are called Korean Style Ribs or flanken. The ribs are then marinated and grilled, or braised.

Lamb ribs, also known as Denver Ribs are not very meaty. They can, however, be very tasty when given the proper treatment. Most people agree; low and slow is the way to go. However, we recommend grilling for about 20 minutes at a higher heat to render the fat followed by braising for a few hours at a much lower heat (225 – 250 degrees F).