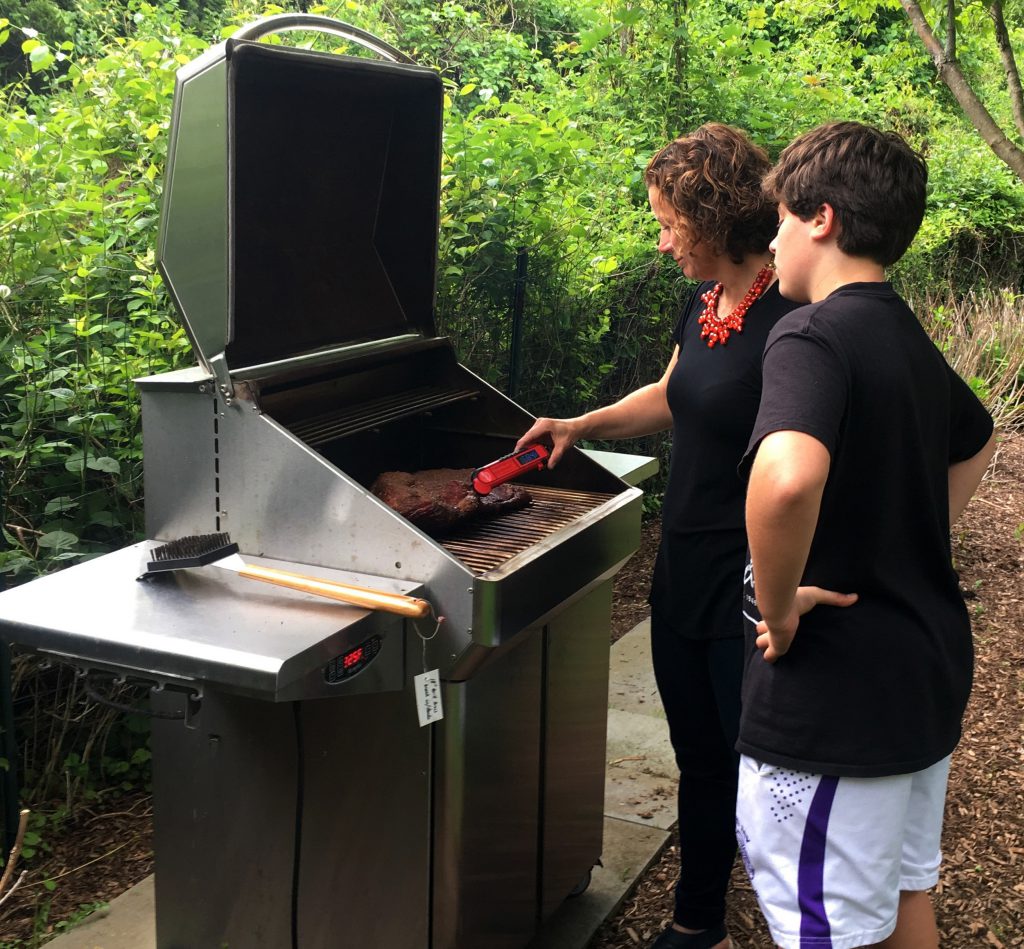 “For barbecue cooks, brisket is the last frontier.”

For barbecue cooks, brisket is the last frontier.  And, what I mean by that is that long after ribs and pulled pork are perfected, many barbecuers still have trouble with brisket.  My sister Mary Pat is one of those.  She is a very accomplished home cook, baker and barbecuer.  She has been grilling and smoking everything you can think of for almost as long as I have.  She has three growing boys and uses her grills year ‘round to prepare weekday dinners as well as entertain. But, the brisket has eluded her until just recently.

She came to visit me and we made one on my Memphis Wood Fire Grill. Before she arrived, she sent me a text asking me what to order from her butcher.  I told her to bring a whole untrimmed brisket, referred to in the business as a packer cut.  She showed up with the brisket still in its cryovac and it went into the fridge until the next day.  That morning, we seasoned the brisket all over with my simple brisket rub and placed it on the grill at 225 F.

“All the while, smoking a melt-in-your-mouth, kiss-the-cook-worthy brisket.  That is the beauty of the Memphis Wood Fire Grill.”

We went about our day, lunched on lobster rolls, went to the bike store and took a long walk on the beach—all the while, smoking a melt-in-your-mouth, kiss-the-cook-worthy brisket.  That is the beauty of the Memphis Wood Fire Grill.  You fill the hopper with wood pellets, set the temp and “forget” it.  My grill is an older model but my sister is getting the new version that has an app allowing you to change the temperature of the grill remotely—that means she can be running her boys around town and still keep an eye on her cue.

When we took the brisket out of the fridge, I explained to my sister that the brisket is made up of two parts; the top “moist” point—also referred to as deckle—and the bottom “lean” flat.  To make a mouth-watering, perfect brisket, you need to cook the whole brisket (the packer’s cut).  The fat in the top “moist” point will keep the “lean” flat basted and juicy during the long cooking time.If you buy the trimmed flat or “lean” part of the brisket then the only way to cook it, melt the connective tissues, and get it tender enough (to eat) is to braise it.  That is why traditional brisket recipes which call for a piece of trimmed brisket, need ingredients like onion soup mix and stewed tomatoes to make it palatable.

I don’t trim any of the fat cap off the whole brisket.  I roast it or smoke it whole with a simple seasoning of salt, butcher-grind black pepper and a pinch of cayenne—just enough to turn the rub a light pink.  The beef itself is so full of flavor that less is more.  It is taking the time to cook it slowly that is the secret to making a great brisket.

If a whole brisket seems too large for your family, buy the whole brisket and slice it in half vertically and freeze the other half for cooking later. This way, you will still have both parts of the brisket and the fat cap on both pieces of meat.  Better yet, cook the whole thing and freeze half of the cooked meat for sandwiches or an easy meal.

“When made right, it is one of the best things that you have ever tasted!”

Some barbecuers trim the fat cap, but I don’t think it is necessary.  If you cook the whole brisket at a traditional smoking/barbecue temperature of 225 F or even 300 F, the fat will slowly melt and render out during the long cooking time, leaving rich beefy flavor behind.  What fat is left should be translucent, almost black and crispy on the top.  That is the most coveted part of the brisket on the barbecue circuit, otherwise known as burnt ends.  When made right, it is one of the best things that you have ever tasted! 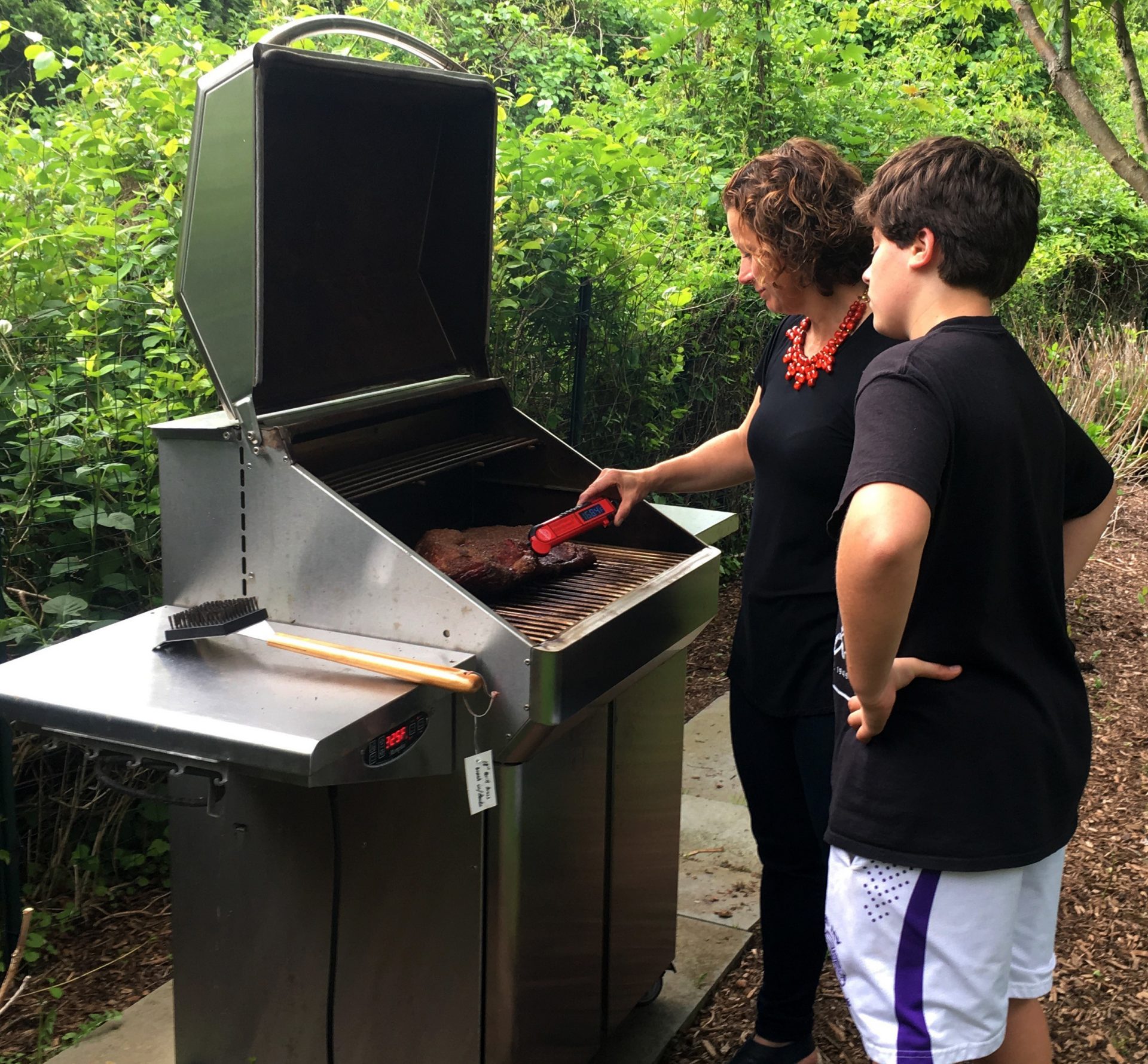 The key to roasting brisket is to set it directly on the cooking grates. This elevates the brisket and allows the air to rotate around the meat.  Don’t be tempted to cook it in a pan, or it will sit in its own juices and steam.  Placing it directly on the cooking grates, it will cook evenly and crisp up everywhere, melting the connective tissues, and the fat and leaving flavor and tenderness in the meat.

For Elizabeth’s full recipe check out Slow-Smoke Brisket by Elizabeth Karmel. You can also learn more about Elizabeth and Girls at the Grill on her website.