In South Africa, it’s braai. The Philippines? Lechón. And if you’re visiting Argentina, make sure you’re asking for asado. Pretty much everywhere in the world, people have put their own stamp and twist on cooking over an open fire or grill. In the US though, it’s barbecue we’re crazy about, but simply loving barbecue isn’t enough – it’s all about regional spins and loyalty for this American favorite. Which has got you drooling? Bone up on your BBQ styles with this handy guide.

First thing’s first: we need a little BBQ perspective before we can delve into this regional rivalry of flavor. And if anyone knows history, it’s the Smithsonian: “From the Atlantic to the Gulf, bordered by the western outposts of Texas and Kansas City, the area of the United States known as the “barbecue belt” houses four distinct barbecue traditions – Carolina, Texas, Memphis and Kansas City.”

The first records of barbecue came from the indigenous tribes Christopher Columbus encountered on his journeys, all of which cooked pork exclusively. “Barbecue Purists” say it can’t be real BBQ unless porcine, “because the original BBQ-ers of the southern colonies depended on the cheap, low-maintenance nature of pig farming. Unlike cows, which required large amounts of feed and enclosed spaces, pigs could be set loose in forests to eat when food supplies were running low.”

But what’s going on with the different styles? Many would say the sauce or rub added to anything barbecued makes all the difference. Smithsonian’s Natasha Geiling says British colonists favored basting their meats in a tart vinegar sauce, which has left a lasting impression on the BBQ styles in North Carolina, while the Germans and French in South Carolina opted for more mustard. Settlers didn’t simply rely on motherland taste preferences though – in Memphis, the transporting of goods down the Mississippi River meant unique flavors could easily be obtained, making locality and heritage added factors in the styles of BBQ Americana today. 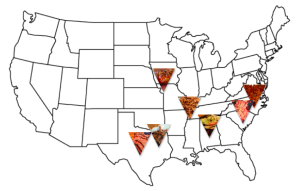 Rib, pulled, sandwiched – anyway you slice it (and we may be a bit biased here), this city’s style is big, and delicious, on pork. Dry (without sauce) BBQ is most typical in Memphis and enthusiasts agree a dry rub isn’t truly Memphis-ified without paprika and a perfect blend of “savory, sweet, and spicy flavors” (BBQ Geeks). While most barbecue in Memphis is served up dry, bbqgeeks.com says those wanting a bit of sauce opt for something on the sweeter side with a vinegar and tomato base.

Where other regions stay true to their styles, Alabama becomes a bit of a BBQ melting pot, er, grill. Thrillist’s Adam Lapetina describes it as, “a kind of between-the-extremes barbecue style influenced by both Texas and Carolina. Alabama tends to skew toward meaty sandwiches filled with pulled pork (or chicken).” The one standout factor for AL though? The creamy mayonnaise and vinegar, coleslaw-esque sauce smothering the fare. 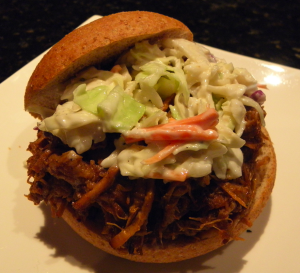 As we pointed out in the history section of this post, meatpacking mecca Kansas City’s proximately to the Mississippi River gave it more options when it came to narrowing down a style.  Burnt ends, otherwise known as “nuggets of barbecue gold” by Serious Eats’ James Boo, are KC’s true claim to BBQ fame, incorporating crispy brisket end goodness with sweet molasses flavor.

A battle of Lexington v. East breaks out when it comes to what half/end/cut of meat is being used in North Carolina barbecue. Lexington favors the shoulder and rib while the Eastside tends to incorporate the whole pig (Adam Lapetina). The two sides join forces though where flavor is involved: both go for a ketchup-based vinegar and spice mixture, uniting them together as the “Cradle of the Cue,” according to the North Carolina Barbecue Society.

Just like it’s northern brother, in South Carolina, the pig reigns supreme. Where these states differ though, is in the sauce. South Carolina’s Tourism Board claims all the best barbecue sauces from across the US can be found in SC – you never need to leave the state. Four sauces make up the list, including vinegar and pepper, light tomato and heavy tomato, with mustard-style on top as the unofficial sauce of South Carolina (and one of the only places you’ll find it).

If you’re a slave to the sauce, Central Texas barbecue is probably not for you. Oak smoked eat is king here and varies from brisket (most popular) and chicken to ribs and sausage (Serious Eats). If you’ve gotta have your sauce though, chances are it will be served on the side. 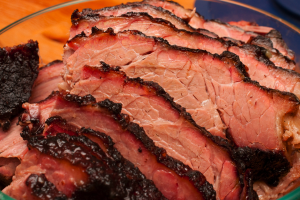 Lastly, but not leastly, East Texas-style, “is a direct descendant of the South’s barbecue, brought to the region by slaves who arrived to farm cotton in the 1800s” (Serious Eats). More often than not, you’ll get this barbecue served in a chopped (not sliced) brisket sandwich and be ready for a mouth on fire, because there is no skimping when it comes to hot sauce (Adam Lapetina).

And there you have it: a not-so-definitive guide to BBQ styles around the US. But (you may be asking yourself) what about Chicago? Or California? Hawaii? And we want to know: what’s your favorite BBQ style?