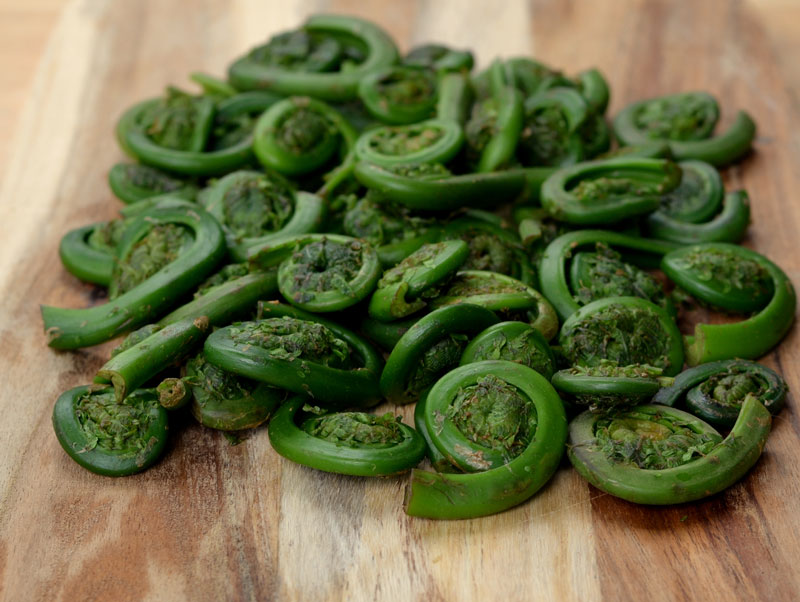 This sought after green is the fresh young shoot of the matteucia struthiopteris, or what is commonly known as the ostrich fern. The harvestable product is restricted to only the first few inches of the young shoot after it breaks ground. As the young plant begins to unfurl the fern frond resembles the neck of a violin, hence the fitting name fiddleheads. Fiddleheads like damp environments in which to grow, so foragers will find them along riverbanks, in swampy areas or in forests where the earth is moist and wet. Fiddleheads can be found in the United States and Canada.

If you choose to forage yourself for this wonderful food in the great outdoors it is advisable to enlist the experienced skills of others foragers before you do. Learning how to identify the ostrich fern when it is still in its early stage of growth is important. Not all ferns are born equal. Only some ferns are edible and, for our menu, the ostrich fern is the preferred choice. Remember, when you do find your fiddleheads follow sensible foraging practices and harvest only two or three shoots from each clump to ensure the plant will thrive for another year.

Intrepid forager, Blanche Cybele Derby, has prepared a short video for those who want to learn more about finding and harvesting this edible plant:

If foraging for dinner isn’t something you have time for, fear not! Nowadays you are likely to find this springtime delicacy at the grocery store in the produce section. I’ve even found fiddleheads in the freezer section along with the other frozen vegetables. Wherever or however you find them, don’t pass up on trying this unusual and tasty food. The season is short for fresh product and usually begins in late April to mid-May, depending on your location. Luckily, fiddleheads keep well frozen, so freezing is a good option if you’d like to enjoy these greens later in the summer.

How to Freeze Fiddleheads

After removing the paper-like scales, trim away the excess tough stems and give the fiddleheads a good wash. Boil fiddleheads for two minutes. Discard the cooking water used for blanching. Plunge fiddleheads into cold water and drain. Once prepped, pack fiddleheads into food-safe plastic bags and pop into the freezer. Do not use a pressure canner to preserve fiddleheads at home.

When it’s Time to Cook

Fiddleheads are easy to cook but require a few mandatory steps. The consensus amongst most food experts is this edible plant must be simmered in lightly boiling water for 15 minutes before serving (or steamed for a period of 10 – 12 minutes) until tender. Never serve raw. Proper handling and cooking of fiddleheads reduces the potential for foodborne illness and eating them uncooked can cause an upset stomach and nausea.

Despite the strict rules about cooking fiddleheads the good news is they taste great. Opinions vary but fiddlehead lovers describe the flavor as something akin to spinach or asparagus. Aside from enticing the taste buds, this edible plant is full of things that are just plain good for you. Twice as beneficial as blueberries, the fiddlehead contains EPA omega-3 fatty acids and healthy concentrations of antioxidants.