When it comes to cooking on a Memphis Wood Fire Grill, Pitmaster Larry Adkins of Mad Dawgz BBQ is a pro, literally. When Larry’s not traveling around the US competing with his wife and two sons in championships and kicking BBQ butt, he also runs a catering company and teaches barbeque classes to outdoor grillers wanting to up the ante. So, what’s going on in his Mad Dawgz head? We decided to find out.

Memphis Grills: You’re part of an award-winning BBQ team and a seasoned griller and use Memphis Grills during competitions.  What tips and tricks do you have for people at home wanting to use their Memphis like champions and take their game to the next level?

LA: One of the tips I teach in my class is that I smoke my steaks (and burgers) first, turn up the temp while the meat is resting, and then give the meat a quick sear.  People are blown away by how good the meat tastes.
One of the tricks I teach is to use the temperature probe function. It enables you to monitor the meat without lifting the lid and adding to the cook time.

MG: What do you love about your Memphis grill?

Larry Adkins: I love how easy it is to turn on and be ready to BBQ/grill in a matter of just a few minutes.  I also love the versatility of the cooker. I can smoke, grill, and my wife even bakes on it.

MG: What is your favorite thing to cook on a Memphis and why?

LA: Wow, my favorite thing? There are so many, so I am going to go with my favorite meal (which consists of several things). Prime Rib roast, grilled asparagus (brushed with EVOO, and seasoned with salt and pepper), my Campfire potatoes (foil pouch of potatoes with bacon), and of course my wife’s Apple Caramel Cheesecake.
It can all be cooked on the Memphis and the food gets such great flavor without being over the top with smoke, [just] a nice “kiss” of smoke.

MG: What’s the most common grilling problem people have in the classes you teach and what advice do you give them?

LA: The most common problems seem to be temperature control and tough meat.  No two meats are the same, and they react differently to the cooking process, so my advice is twofold. First, use the digital control function to maintain the proper temperature.  The main concept I try to instill is that “if you are looking, you aren’t cooking.” This is where the digital control function is key.

Second, cook based on feel and to use the internal temp of the meat as a guide only.  When you probe the meat and it feels like a “hot knife through butter” then you are done.  I have cooked a lot of meat that should have been done based solely on the temp, but was tough as leather. 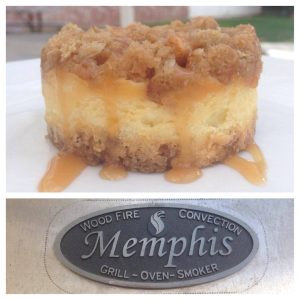