The popular grilling technique of indirectly cooking meat on a plank of cedarwood can be a tricky thing to master, but using the right settings on a Memphis will result in unbelievably juicy and delightfully smoky dishes.

Planking is believed to have been derived from Native Americans in the Pacific Northwest, where both cedar and salmon were plentiful. Natives believed salmon to be a sacred gift from the water and celebrated the arrival of the first salmon of the season. The original cooking technique remains similar today, although experimentation has led to many different iterations of cooking on wooden planks.

How to Grill With Cedar Planks

A critical factor of planking is soaking the plank beforehand. Place your plank in a bath of water for anywhere from 2 to 8 hours. The longer it soaks, the better. Soaking the plank will saturate it with moisture, which prevents the wood from charring or catching fire, adds moisture to the meat, and aids in infusing flavor into your dish. After the soak, spread a thin coating of olive oil onto the side of the plank that will be facing up. For additional flavors, rub herbs onto the plank. 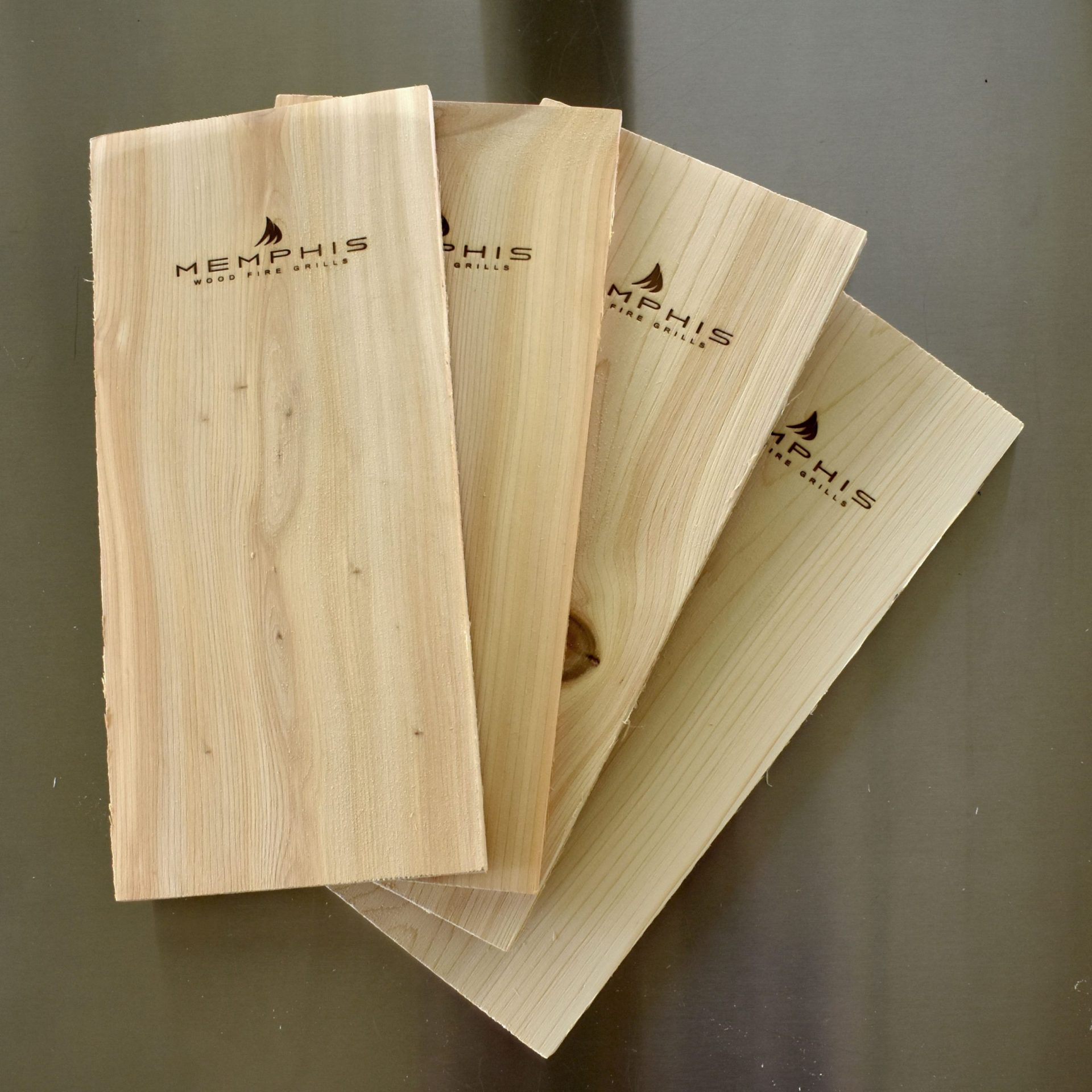 This simple yet important task is easy to forget and can throw off an entire meal if you must wait two hours before cooking. To prevent delays in future plank cooks, add a few extra planks to the bath. Once completely saturated, wrap the extra planks in aluminum foil and place them in the freezer. Next time spontaneity strikes, you won’t have to wait to cook on a plank!

For added flavor, consider soaking the plank in a bath of wine, beer, sake, or cider. With any soak, make sure the plank is fully submerged by placing a mug full of water on top of the plank.

Preparing the Memphis to grill with a cedar plank is simple. Place the indirect flame insert into the grill and allow the Memphis to heat to 350 degrees. Other grills powered by charcoal require an assembly of a two-zone indirect fire.

There are a few different grilling techniques that can be used with planking. The most popular is grilling on indirect heat with the grill covered. To infuse more flavor to the meat, try placing the plank on a direct fire until the bottom side becomes charred. Flip the plank over and place the meat on the charred side and begin cooking with indirect fire. This method is helpful to use when cooking meats like fish that have a faster cooking time and will spend less time on the actual plank. Charring one side of the plank will add more flavor to the fish despite spending less time on the grill itself. Another technique is grilling with a direct flame. Keep in mind that doing so will char the plank beyond reuse, but is optimal for producing more smoke and allowing the meat to pick up the corresponding flavor.

With any technique, be sure to keep a spray bottle with water next to the grill should the plank catch fire.

Depending on the thickness and density of the plank you are using, planks can be reused two or three times with proper care. After cooling, run the plank under warm water and scrub with a scouring pad. Do not use soap, as it will soak into the pores of the wood and alter the flavor. If the plank has a layer of char, try scrubbing it with a fine piece of sandpaper until the wood looks new again. After scrubbing, let the plank sit out to dry completely.

The beauty of cooking on wood planks is that there are so many opportunities to be creative. Mix and match the meat and wood, soak it in flavors other than water, and create delicious meals that delight your friends and family.