For our final National Barbecue Month posting, we wanted to highlight a country that sees barbecue as more than just food, but (like we grill-addicted Americans) as a lifestyle.  Just like we use the word “barbecue” to refer to a form of cooking as well as a gathering, braai (pronounced like try) is Afrikaans for the same. As General Motors advertised in the 1970s, Americans have “baseball, hot dogs, [and] apple pie,” and South Africans have “Braaivleis, rugby [and] sunny skies.”Sounds like a pretty good combo to us. 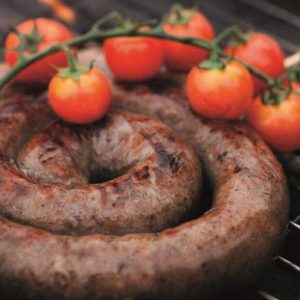 While originally from Portugal, Peri-Peri chilies seem just as synonymous with South African cooking as they do with Portuguese. The Peri-Peri chili is often used in a spicy marinade or rub for braai cooking and is so popular, the South African chain Nando’s (known for its take on PERi-PERi chicken) is ranked #10 in a list of the largest casual dinings chains worldwide. We think they may be on to something tasty and we want a bite.

Like barbecue picnics in America, a South African braai is a fun way to get friends and family together for conversation, drinks, and most importantly, food. Unlike America though, South Africa has specific rules and customs when it comes to barbecuing and to disregard them is a huge low ‘n slow faux pas. For instance, women are rarely, if ever, in charge of cooking the meat – this is the job of one lone man in the party. Instead past Top Chef competitor, Elizabeth Binder, says women handle the preparation of vegetables, salads and side dishes that will accompany the braai.

When it comes to types of meat, partakers in braai can expect to be flush with choices. Beef and ostrich steaks, lamb chops, lamb sosaties (skewers), impala, and most popular, boerewors are just a few of the many offerings. Boerewors are thickly coiled meats, also known as farmer’s sausage, and seasoned with herbs and spices such as coriander, nutmeg, and cloves. In coastal regions, fish braais take center stage and include crayfish, sardines, and prawns.

The most traditional braaivleis you find will still be cooked over a wood fire, as it was when it first reached its delicious conception. Why not use your Memphis’ wood pellets to your (added) advantage and invite your friends and family over for a braai not even South Africans can hold a flame to? This recipe utilizes the flavors of South Africa with the awesomeness of New York strip steak, so there is pretty much no way you can go wrong. And if you’re feeling super ambitious, try out the staple South African relish chakalaka too! (If anything, you’ll have fun saying it out loud.)