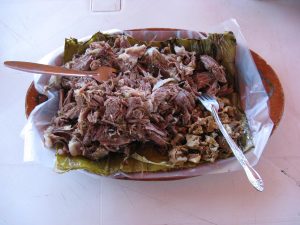 In honor of National Barbecue Month, we’ll be following our noses (and taste buds) around the world of barbecue. And because America is such a melting pot of cultures and experiences, we thought it was appropriate to look at where some of our favorite BBQ dishes come from. What’s on the docket this week? Cinco de Mayo means we’re exploring Mexican barbecue or barbacoa. Those of you familiar with the Chipotle chain of restaurants are undoubtedly familiar with their beef version (it’s been on the menu since 1993), but for those of you who haven’t yet experienced barbacoa – here’s a little background.

A Pinch of History

The word “barbecue” actually originates from the Caribbean Taíno Indian word “barbacoa,” and was not so much a style of cooking as it was a cooking device. According to amazingribs.com, meats such as alligator, turtle and snake were dried, smoked, and salted all using the barbacoa, which resembled a wooden rack raised above a fire pit. The meats were covered with leaves from native agave plants and left to cook slowly over an open fire or pit and then weeks later were made into stews. Low and slow cooking? Sounds like a job for a Memphis.

If you find yourself in Mexico, especially in the regions surrounding Mexico City, chances are you won’t need to look hard to find barbacoa as it’s served today. Fortunately small stands and restaurants across the country have given up the more traditional meats (i.e. the reptiles listed above) in favor of lamb and sometimes goat. The meat is cooked in what seriouseats.com and quericavida.com describe as a bland broth, then pulled apart and served with salsas and sauces, such as molé (the “original” BBQ sauce) to give it seasoning. Occasionally, the cooking broth is then served on the side of the barbacoa.

And if you’re feeling inspired (or just really hungry), whip up a margarita, get your Memphis going and fire up this lamb barbacoa taco recipe from Rick Bayless of Food Network. But ignore all the finagling of grill thermometers and messy charcoal and ash the directions call for. Memphis Grills’ intelligent control system, taste-enhancing wood pellets, and dummy-proof meat probe have you prepped for delicious success.